Are You Always Right? Take This Quiz To Find Out

Take this quick quiz to find out how smart and right you are about politics.  Add up your points to find your political intelligence score!

OK.  Add up your points.

50 – 80: Political Genius Congratulations!  You are always right!  You knew it, didn’t you?  There’s nothing you can say that could possibly be inaccurate.  In addition, you own the opposition.  They are dumb.  You are smart. Good job.

15 – 45: Political Expert You are confident you are always right!  Good job.  You may not own the opposition as much as a Genius, but you definitely earned the condescension you show towards them.  Keep it up!  They aren’t better than you and you know it!

0 – 10: Political Novice Why do you even have opinions?  Don’t you have any conviction?  This is pretty weak. You get owned by every Genius and Expert who troll you online and in life. But, you still have the potential to become an Expert. You just gotta use it.  If you don’t, you’ll get walked all over for the rest of your life.

Less than 0: Political Loser  What’s wrong with you?  You are such a loser! You probably don’t even know that you are right about not being right! What a loser! Stand up for yourself.  Don’t you know that bullies run the world? Sad!

Why do we think we are always right? 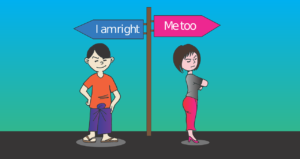 So, I have a confession to make.  If I was to honestly take that quiz at any point in the last 10 years, I’d probably score in the Political Expert range.  I think I’m right most of the time.  You probably think you are too. How can we both be right about all these issues while having different opinions on some of them?

When it comes to political expertise and opinion, I think I have some reasons to be right.  I studied political science in college.  After college, I went to work in politics on political campaigns for about a decade now. I have worked on issues from the environment to workers’ rights to gerrymandering.  I’ve even run for public office before.  All of that, and my own independent reading, help me justify to myself why I’m correct when it comes to all the political issues we are forced to care about in today’s culture.  But that’s all it is – justifications.  We all have reasons to believe we are right.  At various times, I thought I have known everything.

Immigration? I got that. Gun Control?  Wow, if you don’t listen to me about that, you are as dumb as you look.  Economic justice issues?  I can (and probably will) write polemic passages with conviction about my righteousness. Terrorism?  I know how to deal with that. Syria civil war?  Let me control foreign policy, lives will be saved.  Healthcare?  I got the right prescription.

Of course all of this is ridiculous.  If I was in charge of healthcare policy, I’d make the US a single payer system – Medicare for all.  Is this the “best” solution?  Maybe.  If I had my way on gun control, the US may look more like the UK when it comes to gun deaths.  But would this be the “best” solution? Maybe. Would it be the solution with the most “freedom”?  Maybe.  Honestly, I don’t really know, but I have the conviction to never really change my mind.  The truth is that we all come up with our opinions first, retroactively justify them then jealously guard them from outside attack – even from ourselves.

When have you been wrong?

We don’t like to admit we were wrong, even when we change our minds.  For example, can you name the top 3 political topics that you previously felt one way about, but have since come to feel the complete opposite?  Were you pro-choice in your younger days, but now that you have kids you have come around to respect the sanctity of life more and feel more pro-life?  Were you a pro-gun and 2nd amendment lover before your friend or family member was impacted by gun violence? Now you are supportive of gun control measures.  When has this happened to you?

Unless there has been some specific instance you can easily point to as a turning point, you probably think you have had your current political positions throughout your adult life.  This is called hindsight bias.  Thinking that you “knew it all along” has three different levels of cognitive bias:

Psychological scientist Neal Roese has written extensively about Hindsight Bias.  Roese explains that “if you feel like you knew it all along, it means you won’t stop to examine why something really happened.” When we don’t stop to examine why something happened, it’s hard to fix new problems when they occur. This is particularly true in politics.  Roese explains that “it’s often hard to convince seasoned decision makers that they might fall prey to hindsight bias.”

You can’t judge a book by its cover,  can you?

Judge these aphorisms on a scale of 1 to 5, with 1 meaning you highly disagree, 5 meaning highly agree.

If given a seemingly wise quote, we will agree with it – even though it may contradict what we just agreed with.  We will fix this cognitive strain by believing we weren’t fooled – believing that we were right the whole time, even when we weren’t.

How did you score by the way?  Did you think Fear was stronger than Love or vice versa?  Or both?  When it comes to hindsight bias, you are always right – even if you take both sides of an issue.