Our culture and media help give you a representative of a liberal and a conservative.  Watch Fox News to understand how culture influences what the representative of a liberal means to us.  Day in and day out for years the culture machine tells us what being in the group ‘liberal’ really means. Try to picture in your mind a ‘liberal’ (even if you are one and are picturing yourself).

Got it?  Good.  Is your liberal a man or a woman?  Is he wearing wingtips or sandals?  Is she wearing a power suit or flowery sundress?  Is he sipping lattes in his ivory tower?  Is she burning her bra in protest of the war?  Is he more likely a college professor or a farmer?  Is she older than 60 or younger than 30?  Is he driving a hybrid Prius or Ford F-150?  Does he hate freedom?

Whether each of us believes in these stereotypes of liberals, we can conjure up a certain picture of one from cultural identities.  A liberal is a Starbucks-drinking, Prius-driving, Christian-hating, weed-smoking, France-loving, business-loathing, abortion-having, government-doting, hippie, elitist.  I could go on, but I’m sure you can fill in the rest of the stereotype.  Where do these representatives come from?  Why are they persistent? Who keeps these stereotypes active in the public conscience?

Liberals are literally bringing the apocalypse 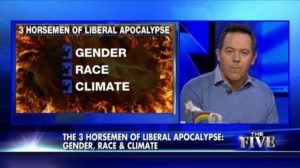 These generalizations are found everyday from the conservative point of view, not only on conservative media (Fox News, AM talk radio with Limbaugh, Hannity, Beck, etc, WSJ editorial page, Townhall, American Enterprise Institute and other think tanks as well as book after book released by these same talking heads, i.e. Ann Coulter, Michael Medved, Michael Savage) but they also are found almost everywhere politics is discussed.  Turn on CNN right now to find a moderator speaking about the days’ news with a “Democratic Strategist” and a “Republican Strategist.”  No matter what the discussion is about or how ridiculous a point of view is, the political news is still projected to us thru two seemingly equal and opposing viewpoints.  Both “Democratic” and “Republican” points of view are given equal weight as if they are both valid viewpoints and the only two viewpoints one should take on this issue.  This is the heart of false equivalency from media outlets. The false equivalency of today’s debate allows conservative talking heads to spout these talking points everyday with a level of legitimacy it doesn’t deserve.  Campaign after campaign, cycle after cycle, year after year, these representatives creep into the public conscience until they become public consensus.

This has helped conservative Republicans to win elections every year while needing nothing new to say for decades.  Successful political strategies don’t need truth; they need money and a narrative. Simply accusing your opponent of being a liberal has won far too many elections than maybe it should.  When a candidate accuses his or her opponent of being too liberal, that candidate is using the representative heuristic to score political points.  Having “liberal” policies may not, in and of itself, have a detrimental effect on the public’s attitude towards a politician.  However, the connotations that being a “liberal” bring with it, from years of constant cultural consciousness, often have detrimental effects for politicians.

If you’re not liberal – then who are you?

Politicians can support liberal policy all they want, as long as they aren’t perceived as a liberal. Why do Democratic Senators and members of Congress seek out press embracing their farmer/rancher background? Or hold photo-ops holding a gun while they are out hunting? Or speak of their humble beginnings? Or speak of being a small business owner? Or are seen going to church?  All of these play against the representative liberal.  The argument liberals use to convince the public they are not actually liberals looks something like this:

Year in and year out, conservatives sully the reputation and characteristics of liberals in general.  Year in and year out, liberals portray themselves as not having those characteristics.  However, when countering conservative claims of liberalness, politicians give credence and legitimacy to the cultural representative of “liberal.”  If President Obama has to cut federal jobs in his budget to show he doesn’t love big government, that act just reinforces the stereotype that liberals love big government (and with no one left to stand up for “big government”, New Deal-esque policies are left with few supporters and less popular support).  If then-Senator John Kerry needed photo-ops showing him shooting a rifle to temper the public’s perception of him being “too liberal”, then the stereotype is being reinforced that liberals hate guns. Conservatives went out of their way to mock Kerry for this photo-op anyway.  He was attempting to show he’s not liberal because he’s shooting a gun.  Liberals don’t shoot guns.  Therefore he’s not a liberal.  Right?

So, are liberals just “progressives” now?

This reasoning has been a thorn in the side of the Democratic Party for decades.  The representative heuristic has turned “liberal” leaders into “progressive” politicians.  Ted Kennedy was known famously as the Liberal Lion of the Senate.  The term “liberal” for decades was a proud moniker for reformers of all types.  Lincoln was a liberal. Teddy Roosevelt was a liberal. Franklin Roosevelt was a liberal. Truman, JFK, LBJ, RFK, MLK – all liberals.  Series of culture and counter-culture movements since the 1960s in America have fought over what the term ‘liberal’ describes.

With the defeat of so-called liberal Democratic nominees for President starting in the late 1960s from Humphrey to McGovern to Mondale to Dukakis, the liberal label began to ring with a defeatist, pejorative connotation.  President Bill Clinton’s ascension to the White House was brought forth by a “Third Way” or “Triangulation Strategy” or “New Democrat” approach to the liberal problem.  Bill Clinton won the presidency in part by campaigning against liberal politics.  A Southern Baptist who talks more like a preacher than a politician, President Clinton effectively ended the popularity of the ‘liberal’ label.  After years of losing Presidential elections, the Democratic Party won the White House by finally throwing off the ‘liberal’ label.

Rank and file Democrats were, by and large, fine with casting aside the term ‘liberal’ if it meant their party actually won national elections.  As a result, both Democrats and Republicans have contributed to this representative heuristic using “liberal” as a pejorative.  Democrats in Congress with liberal policies tend to call themselves “progressives” today.  This rebranding was seen as necessary as they have cast aside their former term.

So when you see yourself judging a neighbor because he told you he was conservative, or when you see someone on television use “liberal” as an insult, remember that this is the representativeness heuristic at work.  People like to categorize other people. It makes life easier for us.  But just like breaking down racist or sexist stereotypes, you can contribute to breaking the hold of representativeness by actually getting to know the people who you are putting in these boxes.  Get to know your conservative neighbor.  Maybe he gets to know you.  Maybe, on an individual basis, we can move past the labels.