Pattern Seekers – Why we see something from nothing

Remember this line of letters. I’ll quiz you at the end.

Great.  Now what does this look like to you? 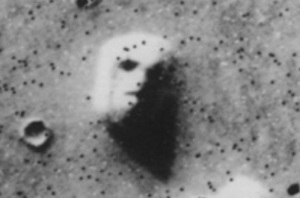 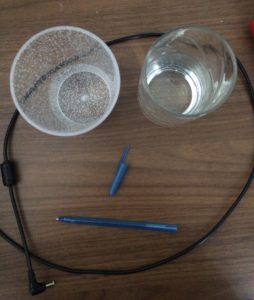 Human beings are wired to recognize faces.  It’s what we do.  Babies recognize their parents faces within hours of being born.  We can recognize a loved one’s face in a crowded room instantly.  We are incredible at recognizing this specific facial pattern.  Due to this ability, we are extremely sensitive to picking up this pattern.  This helps us when scanning a bar to find our friends or to find that attractive girl who may be looking our way.  But this pattern recognition can go overboard when we see randomness and call it a pattern.  The tendency to perceive a specific, often meaningful image in a random or ambiguous visual pattern is called Pareidolia.

The first image above comes from a 1976 NASA picture of the surface of Mars.  People saw this rock formation in a familiar pattern and came up with explanations for why a face is on Mars.  Could it be Martians building the face of a God or King?  Could it be a giant ancient Martian alien encased in the surface for eternity?  Or could it be some rocks that randomly formed together?

The second image above depicts items currently on my desk. Simple items in a familiar facial pattern elicits a specific reaction in our brains.  We are a pattern-seeking species.

This pattern-seeking behavior is not relegated just to finding the face of Jesus on our toast.  We have a tendency to look for patterns in all sorts of ways.  Just look at any of your favorite conspiracies. 9/11 truthers will selectively pick out random pictures and video clips that support their (ridiculous) theory that 9/11 was a government conspiracy.  JFK assassination conspiracy theorists will create all sorts of patterns for motives from the CIA to Fidel Castro to the mafia to Lyndon Johnson. They find patterns in the randomness and assign meaning to it.

So what’s the harm to us politically if a few people believe in conspiracies?  Good question.  It’s not that we just find innocuous patterns in random images and events.  According to psychologists Christopher Chabris and Daniel Simons, problems occur when we are fooled by causation:

“The illusion of cause arises when we see patterns in randomness, and we are most likely to see patterns when we think we understand what is causing them.  Our intuitive beliefs about causation lead us to perceive patterns consistent with those beliefs at least as often as the patterns we perceive lead us to form new beliefs.”

In other words, we misunderstand the various causes for an event.  Then we find a pattern from randomness around that event that is consistent with the cause we attributed to it.  Then we will selectively look for information that fits our pattern – thereby finding supporting ‘evidence’.   It’s one thing if we apply this to finding Bigfoot in rural Canada.  It’s a more dangerous thing when we apply it to immigration policy or the economic downturn of the Rust Belt in the last three to four decades or to national drug policy.

Causation in the Rust Belt

I’m from the Midwest.  The economic changes taking place from Detroit to Cleveland to Pittsburgh to Milwaukee since the 1970s have many causal factors: the decline of union membership, globalization, trade treaties like NAFTA, rising technology replacing manual labor, offshoring factories to China, Mexico or India, cheap foreign goods, complacency of top auto makers.  I could go on.

However, as I’ve already discussed, people don’t respond to a list of probabilities.  People respond to narratives.  We respond to a story – with a hero, a challenge, a villain (or cause of the challenge) and overcoming that challenge.  If a factory closes in Chillicothe, Ohio, what story will its former workers tell about why it happened?  Will they conclude that it was “inevitable market forces brought about by global treaties” and happily take ‘job training’ credits from the government to ‘transition the labor force into a 21st century economy’?  You may have guessed this, but of course not.  In that story, the government is part of the problem in signing trade deals that helped ship their jobs overseas.  They don’t want to ‘transition to emerging marketplaces’.  They can’t.

I’ve lived in Chillicothe, Ohio.  I love the place. If the paper mill there closes down, the workers aren’t going to become software engineers overnight.  They have mortgages to pay, families to support and have built up years of specific knowledge around making paper products.  Even if they learned a new skill, Google isn’t hiring in Chillicothe. Neither is Amazon. Nor Facebook. And they are never going to be.

These factory workers are looking for answers, looking for a pattern to understand the world.  We all are.  They aren’t going to be swayed by job training credits and shrug it off to globalization. Instead, these factory workers may believe that immigration closed down their mill.  Workers overseas or here in the U.S. who are willing to do the work for less money undercut the American factory worker.  The mill is more profitable in India or in rural North Carolina where the company can pay the workers less money and benefits.  The factory worker may see a small influx of Mexican immigrants in town as a cause the factory was shut down.  As I stated earlier, once we misunderstand the cause, we will then create patterns out of randomness.  If the factory worker blames immigration or poor (read: brown) workers overseas, he will look for clues to fit his pattern everywhere he goes.  Every story about an immigrant he sees will then fit into this pattern.

When we seek a pattern, media helps us find it

He doesn’t have to go very far to find those stories.  Conservative media is happy to provide him with all the clues he wants.  Do you ever wonder why national media outlets focus on seemingly innocuous local stories sometimes?  That may be a local elementary school including a song about their (then) current president.  Or it may be the current president pointing out specific crimes that happened to be committed by immigrants.  Or specific people who claimed to have been hurt by Obamacare.  None of these stories appeal to me.  But they certainly appeal to anyone looking for certain patterns.  They serve to reinforce certain narratives – the criminal immigrant, the terrible effects of Obamacare, the liberal indoctrination of our youth.

Whereas I may see these stories as specific individual events, I am not looking to put them into a preconceived pattern.  Others are.

Everything in politics is debated.  There are no questions in which we have a consensus across the political spectrum. In this atmosphere, the cause is always in question (Did FDR save us from the Great Depression or make it last longer?  Is climate change occurring or are we getting hotter because Ryan Gosling was born, thus bringing the world’s hotness up a few pegs?)  When the cause is always in question, we will always look for patterns that fit our beliefs.  When these patterns are reinforced thru the media, beliefs become hardened and myth becomes reality.

Remember those letters I asked you to memorize at the beginning of this (long) post?

Without scrolling back up, can you repeat those 20 letters in a row?

How about if I make the pattern more clear?

You may not have been able to remember 20 straight letters without knowing the pattern.  But you can probably remember seven abbreviations that have meaning.  They are the same thing.  It’s just easier in a pattern.