Introduction to Priming – Is Fox News Fascist? We report, you decide

24 hour news networks like CNN, Fox News, MSNBC, Fox Business, etc have to fill the airwaves with “news”.  Television news both tells you a story and shows you how to feel.  What did you see when watching 24 hour news?  Did you see “Breaking News” graphics?  Did you see the latest in gossip from the ticker?  Did you see 2 to 4 “panelists” discussing whatever crazy thing Trump said today?  If so, did you see this? 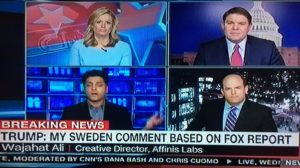 Yep. That’s CNN.  Notice it’s Breaking News.  Notice the four boxes of talking heads.  Notice the fake backgrounds behind all of the talking heads.  Notice what they are talking about: our president made an erroneous comment at a rally (that his supporters cheered) about something “bad” in Sweden based on his interpretation of a Fox News report.  This is where we are at in the United States.  Our president gets his “news” from Fox News.  Then he interprets it however he’d like.  Then he pushes this interpretation out to his supporters (who cheer him) and the world (who doesn’t know what he’s talking about).

How did Trump come to understand that there was a terrorist attack in Sweden?  And why did his supporters cheer when he did?  I have little reason to believe that he didn’t get it from Fox News.  Fox News is a priming machine.

According to Psychology Today, priming is a “non conscious form of human memory concerned with perceptual identifications of words and objects.”  Priming works like this: if you see the color yellow right now, you are more likely to quickly identify a banana.  That’s due to how our memory works in associating bananas with their yellow color.  This sort of priming can be used to show how we all our influenced by ideas, words, pictures and people without consciously knowing we are being influenced by them.  Our memory works through this sort of association.  Remember the first time you rode a bicycle?  Your memory doesn’t work like a computer in that you have a stored memory of that time you rode a bicycle for the first time.  It’s more of an association between your first bicycle, the road in front of your house at the time, your father who helped run beside the bike so you wouldn’t fall, your other memories around that age and many other factors that combine to bring to life the story of your first bicycle ride.

In the same way, we associate words and ideas together through culture, our experience, our surroundings, people in our lives and the greater world around us.  Fox News does a great job of associating ideas to reflect their conservative narrative.  Fox News consistently primes the words Liberal or Democrat or Left or Socialist with negative connotations.  When the Tea Party rallies were going on in 2009 and 2010, Fox News would describe these protesters as Patriots, Real Americans, true to our Founding Fathers.  When anti-Trump protesters came out, Fox News describes these protestors as anti-American, liberal elites, trouble-makers, anarchists, Marxists, Communists.  If, in the conservative reality, anything that can be seen as liberal, Democratic, left-leaning, etc can be automatically described with negative connotations, then these words become associated in our memories as linked.  Liberal is connected with elitists or out-of-touch.  Conservative is connected with patriotism.

Fox News can then do a story about a protest or an issue in Sweden that may have happened years ago or may not really have happened at all.  The associative memory, motivated reasoning and priming unconsciously sets in to its viewers brains. Sweden = liberal.  Liberal = terrorist-loving. This equals Sweden gets whats coming to them from this terrorist attack.  It doesn’t take much research or cognitive thinking to slow down and realize the errors in judgment.  But in order to have this mode of thinking kick in, you must be willing to have second thoughts about these quick judgments you have made.  As we already know about confirmation bias and the backfire effect, people are often not willing to challenge views that they already agree with.  This is how you get Fox News priming our President for a terrorist attack in Sweden that never existed.  I would hope our President and his supporters have the cognitive ability to examine their judgments, but as we know by now, it’s not about intelligence.  It’s about a belief in and identifying with a narrative.  Our brains function to keep that narrative alive.

Why did I have you turn on 24 hour news coverage earlier?  Chances are you consumed not just what was being said, but how it was being said, what the graphics told you, the frame in which the question was asked, the tone of the debate, the equivalency of ‘the right’ and ‘the left’, the general physical appearance of the ‘pundits’, the titles or organizations of the pundits and keywords repeated over again like talking points.  You may not even have been aware of everything you consumed, but either consciously or subconsciously you did consume it.  All of these factor in to how we think about the world.  They prime us to think about the world in that frame.

So the next time you see Fox News “innocently” pose a question like, “Are liberals destroying this country?” on the bottom half of the screen, please understand that no matter the answer, the question itself primes viewers to link liberals with destroying the country.  So, is Fox News a fascist organization?  I don’t know. Just posing the question.