Rep. Peter King says Trump pointed him out and said they grew up near each other. After that, "it would be hard for me to vote 'no.'"

Each Friday we will highlight a politician or local political scene that has shown some cognitive flaw, or bias.  Individually, these stories may fly under the radar.  As a whole, they contribute to our current state of biased politics.

This week we highlight Representative Peter King (R) ( NY-2) for giving the world perhaps the dumbest reason to vote for a healthcare bill.

Congressman Peter King may vote for the GOP Healthcare bill (which may kick some 20 million Americans off health insurance) because Donald Trump pointed out to him that they grew up near each other.  Does this seem like a good reason to you?

The fact is that we all tend to see people in our own group differently than those of an “out group”.  How many groups do you belong to? When you see someone from this group identity, do you like them more than someone who isn’t?  This in-group dynamic creates division, but also personal bonding.

I was born and raised in Ohio. I would identify myself as liberal. I eat Chipotle quite a bit. I am a white male in my 30s with a stubbly beard.  So, if I was at my bank here in Washington DC and saw some guy rob the bank, I’d probably want to see him arrested.  However, if I knew he was robbing the bank to pay back his family members who lost their home in that bank’s illegal mortgage dealings – and I knew he and his family were from Ohio – and he was a white male in his 30s with a beard – and he took his gun out of a Chipotle bag at the bank – I may connect with him on a personal level and not want to see him arrested. Heck, I may want to drive his getaway car.  Once we connect with someone on a personal level, we want that person to do well and will often help this person when needed.

So, Peter King may have just been joking a bit when he told reporters he’d vote for the Healthcare bill because he grew up close to Trump.  Who knows what motivations Congressman King has for taking away healthcare for millions of Americans. This motivation, however, is a joke. The American people deserve a better answer.  Does he think we don’t deserve healthcare?  Does he think ‘freedom’ is in jeopardy under Obamacare therefore this bill will free the people?  I don’t know.  But just because he has some small geographic connection with Trump doesn’t justify overhauling a healthcare system to make poor people suffer. 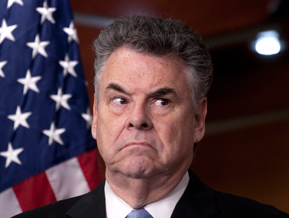 This way of thinking – supporting an idea because it comes from a member of your own group –  is prevalent in politics today and can lead to ruin.  Whether that’s supporting an idea just because your fellow Democrat or your fellow Republican supports it or supporting a bill because someone once lived in your neighborhood, we all fall victim to this distorted thinking from time to time. When it happens, although, we have an obligation to call someone out for it.  So, Rep. King – stop sucking up to Trump, stop being enthralled by his once close proximity to your neighborhood, and tell the people why you really want to kick poor people off Medicaid with this bill.  We are waiting.